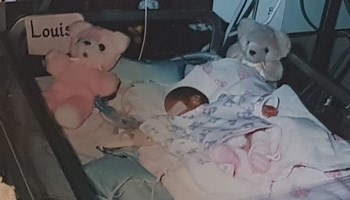 We recently caught up virtually with a much-valued member of our Consumer Advisory Group, Louise Pallot, to speak about her experiences that led her to want to get involved in our research.

Louise is now 29 years old, a paediatric nurse, an aunty and excitedly expecting her first child. Louise was born at 24 weeks gestation and weighed a tiny 710g. She spent 89 days in the neonatal intensive care unit (NICU) at the Royal Womens Hospital in Melbourne being cared for by our very own Chief Investigator, Professor Lex Doyle. Due to requiring a breathing tube during her NICU stay, Louise has Vocal cord palsy, or VCP, for which she spent many years having speech therapy as a child. It has resulted in her voice being weaker and sounding hoarse, however Louise says that having only had a 10% chance of surviving, she counts herself very lucky, “I became a nurse because I felt it was important for me to give back when I had been given so much as a baby”.

Louise joined our Consumer Advisory Group in July 2019 due to a desire to help families who are currently going through her experience, “I wanted to be involved in consolidating all the research and changing clinical practice now in the hope this will help the development of babies in the future. This is important to me because I am just finding out about what being born early means for me and my life, however I hope what we are working on with the CRE in Newborn Medicine now will help NICU babies now as they grow up with having early interventions and improving their outcomes”.

You can see Louise, and other members of our consumer advisory group as they share their lived experiences at our 2020 Newborn Medicine Online Forum on Wednesday 9th September. Find details of the event here.